Warning: "continue" targeting switch is equivalent to "break". Did you mean to use "continue 2"? in /home/domains/pangeabuilders.com/docs.dev/wp-content/plugins/siteorigin-panels/inc/styles-admin.php on line 390
 Urban Curbside Composting, Recycling Service | Pangea Builders

CEDAR CITY â€“ Worm poop. Thatâ€™s the secret to what Tim Ferguson and Kelton Wood, owners of Natureâ€™s Way Recycling in Cedar City, hope will be their success. Not necessarily just for their own sake but, more importantly they said, for the sake of Southern Utah. And maybe even the world.

For $5 a month,Â Natureâ€™s Way RecyclingÂ will pick up your food waste, cardboard, paper and landscape trimmings, feed it to some worms and produce a fertilizer with up to 50 percent better water-retention rates than regular soil.

Besides the water retention, Ferguson said, compared to regular soil, the growth rate of the plants is 33 percent faster at all stages when using the fertilizer, and the yield is 30 percent higher.

And thatâ€™s just the beginning. Natureâ€™s Way Recycling has also set itsÂ sights on recycling other products either currently not being recycled at all in Cedar City, including glass, or only being handled by the recycling drop-off binnies.

We really want to be building a sustainable future

â€œWe really want to be building a sustainable future,â€ Ferguson said. â€œYes, this is a business, but realistically, when we can process every type of material, we can start eliminating dumps completely. And thatâ€™s a better world for everybody.â€

According to the Consumer Reports article â€œSpoiler Alert: Youâ€™re Wasting 1 in 4 Bags of Groceries,â€ food waste is the biggest component of landfills, and the majority of itÂ doesnâ€™t come from grocery stores or restaurants but rather individuals. In addition to money lost to tossed food â€“ an estimated $1,500 annually for a family of four â€“ there is a bigger global concern. Food waste produces methane gas as it decomposes.

This issue already fit into the mission of Natureâ€™s Way Recycling to â€œmake landfills slow, shrink and eventually â€¦disappear.â€ However, the article also discusses the amount of wasted energy, labor and water it takes to produce, package and deliver this food.

Both of the founders having a background in farming or ranching, and since they currently live in theÂ already water-taxed region of Southern Utah, Ferguson and Wood thought starting Natureâ€™s Way Recycling was a step in the right direction.

Given the high water-retention rate of their product, Ferguson said, if their fertilizerÂ startsÂ getting added into the agricultural process, it would significantly reduce the water needed to produce the same crop.

How to make worm poop
The process for making the fertilizer is something many gardeners have been doing for years. Once a customer is signed up with Natureâ€™s Way Recycling, they will get a sealable bucket for theirÂ food waste and a bin for theirÂ paper, cardboard and yard trimmings.

Every two weeks, Ferguson and Wood will collect the material, either shred it or blend it, mix it all together in a large container, dump the worms in and wait. 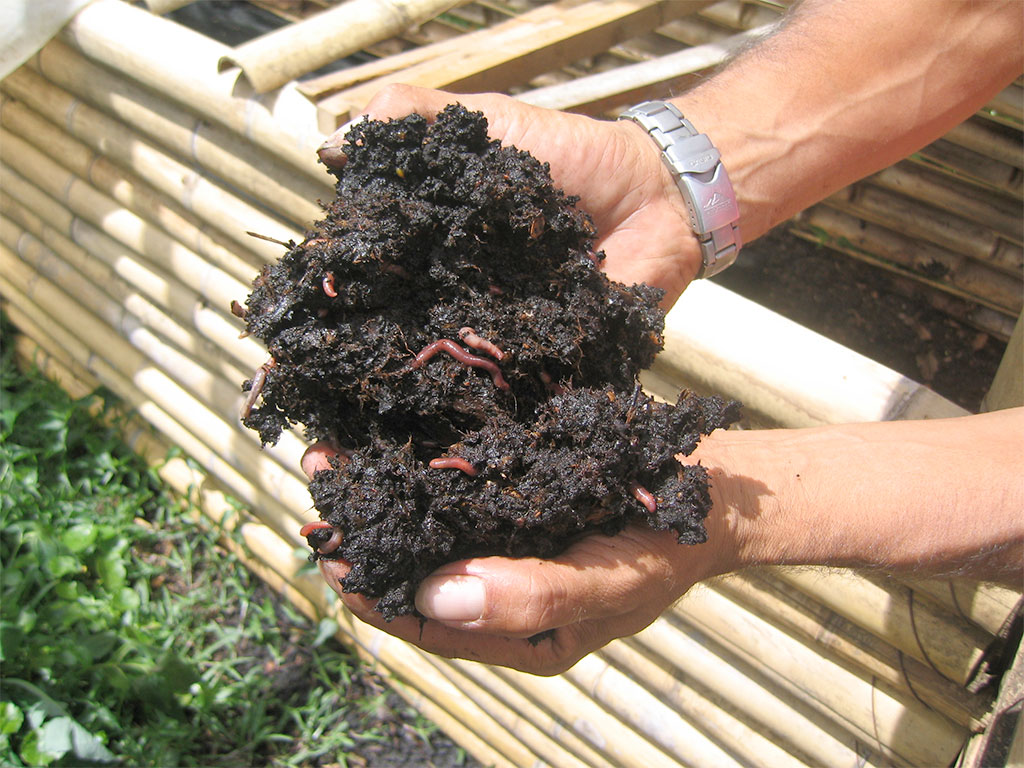 The process takes approximately two to three months, Ferguson said, with 20Â pounds of garbage coming out to roughly 15Â pounds of fertilizer.

The end product, officially called â€œworm castings,â€ is fibrous and balanced. Ferguson and Wood monitor the pH levels to make sure it doesnâ€™t get too acidic.

â€œItâ€™s impossible to overfertilize,â€ Ferguson said. â€œIf you just take cow or pig manure and spread it over your fields, you have no control over the phosphates, which is what tends to burn plants frequently â€¦. But this is time released, no matter what.â€

In the beginning, Ferguson and Wood did some test runs on the fertilizer.

In one instance, someone Ferguson worked with who is very picky about what they put on their garden used it in an attempt to bring back struggling peppers and watermelons.

â€œThey all came back to life in like a week,â€ Ferguson said. â€œLeaf damage repair. They turned from that dull, fading yellowish-green to a vibrant green. And that was all within a week.â€

Natureâ€™s Way Recycling currently sells the fertilizer in bags from 1-5Â pounds, with plans on offering up to 50-pound bags. Ferguson said they want to keep it cost-efficient for both them and their customers.

Natureâ€™s Way Recycling has only been offeringÂ the service since April; however, as the business continues to get more customersÂ on board, Ferguson and Wood plan to move into higher volume. In the immediate, Ferguson said, they have been contacted by Dixie National Forest representatives, who want to meet with them to discussÂ partnering with local schools.

â€œTheyâ€™re looking into us as a sustainable answer,â€ Ferguson said.

In the longer term, Ferguson said, they want to move into clean recycling for all recyclables, something they would like to see within five years.

â€œWeâ€™ve already got all the organics covered,â€ Ferguson said, â€œand within five years, as we grow, it should reasonably be where we can handle typical recyclables: the glass, the plastic, the metal.â€

However, as theirÂ websiteÂ says, they canâ€™t do it alone.

â€œIf you find yourself rolling your eyes and waiting for the catch here it is â€¦ here it is. You actually have to recycle. This doesnâ€™t work off of hopes and dreams.â€

Housing programs not supported by San Francisco
Sewage in Pennsylvania to Power in Maine
Green Building Week 2016
Cement made from steel production waste is huge CO2 reduction
Sustainable urban agrihood growing in Detroit
To your Health, from sustainable buildings
How farmers on the Great Plains are changing the local climate
6 Ways to Teach our Children about Sustainability
Tagged on: compost    farms    gardens    methane    people    plants    recycle    trash